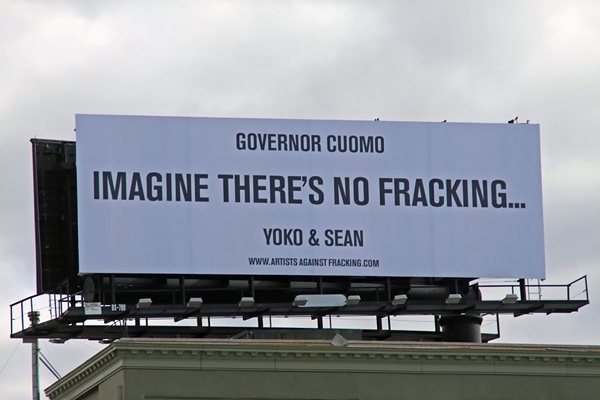 Yoko Ono, Sean Lennon and their Artists Against Fracking group have posted a large billboard in New York urging Gov. Andrew Cuomo not to rush a study on the natural gas extraction method known as hydraulic fracturing to meet a November 29th regulatory deadline. The billboard reads "Governor Cuomo: Imagine There’s No Fracking," and is situated on the Major Deegan Expressway, a route oven traveled by Cuomo. By missing the November 29th deadline, New York would be forced to draft new regulations, as well as reopen a window for public comment.

"Our message is simple: we want Gov. Cuomo to imagine and guarantee a New York free of the fracking threat to our water, air, beautiful landscapes and climate," Ono tells Rolling Stone. "Every time New Yorkers pass this billboard, we also want them to imagine a truly clean energy future, not fracking."

"Fracking for gas is inherently dirty and dangerous," Lennon adds. "Cement and pipes at these great depths are simply not reliable, as the industry's own documents show. Cracks and leaks will inevitably poison wells and aquifers. Rural communities will be turned into industrial brownfields. No amount of regulation can make fracking safe."

Artists Against Fracking have called for a meeting with Cuomo to discuss the consequences of fracking, but have yet to receive a response. "New York can create far more jobs, and create and save far more energy than fracking will ever produce by insulating all buildings, replacing all windows, and greatly expanding clean, renewable energy," Ono and Lennon wrote last month. "Imagine Clean Energy. Don't Frack New York."